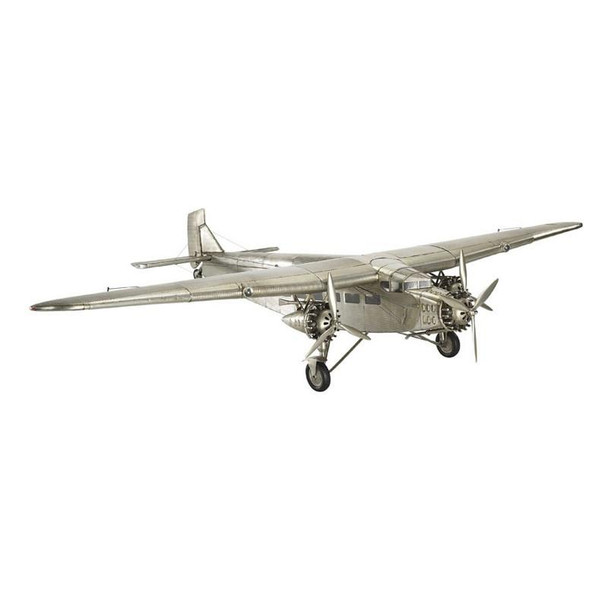 Between 1926 and 1933 some 200 Trimotors were built in Ford’s own factory. Corrugated metal on great thick monoplane wings was a German development, used in Junker JU-52 planes that were flying the Berlin-Rome-London route. Trimotors were flown by airlines, oil companies and wealthy individuals. The Ford Trimotor and Junkers JU-52 were pioneering aircraft that led to generations of Douglas and Boeing fleets of aircraft, soon to criss-cross the world. (Stand included) DImensions: 26.25x39.75x7.75 inches

MSRP:
Now: $895.00
Was:
The P-51 Mustang was the first US built fighter in action after the fall of France, successfully engaging every air-born opponent from early Junkers to the Messerschmitt. Fast, powerful and...
AP459

MSRP:
Now: $125.00
Was:
One of the most beautiful planes ever designed. A flight icon and engineering marvel. The only supersonic passenger aircraft ever made. London-New York in 3 hours. Its sleek, elegant shape defined a...
AP112

MSRP: $300.00
Now: $250.00
Was:
This is a beautiful Authentic Models Fokker Triplane. The model is made of wood with finished fabric on the wings. The model has an 18" wing span and metal spoke wheels. It has a working compass...
AP203

MSRP:
Now: $249.00
Was:
Detailed model of the one that Charles Lindberg soloed across the Atlantic. Take a peek through windows into a detailed cockpit. Dimensions: 12.25 by 19.5 by 3.5 inches Discontinued-Limited...
AP250-DISC

MSRP:
Now: $275.00
Was:
Legendary airlines ruled the 1930s skies. Pan Am, Trans World, Imperial Airways… When the DC-3 was introduced, travel was changed beyond recognition. It instantly became an iconic presence,...
AP110

MSRP:
Now: $837.50
Was:
Constellation air crafts are known for being sleek and powerful. During their time they set many speed and distance records.  The propellers rotate on the plane and a aluminum stand is included...
AP458