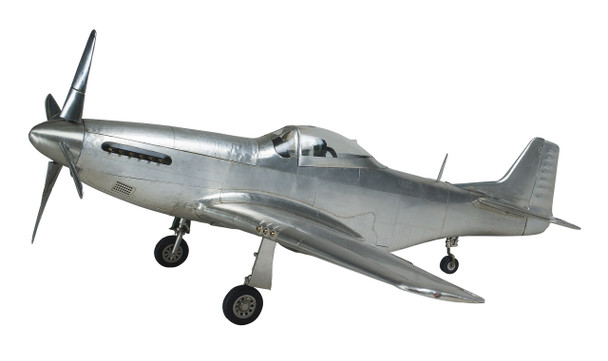 The P-51 Mustang was the first US built fighter in action after the fall of France, successfully engaging every air-born opponent from early Junkers to the Messerschmitt. Fast, powerful and maneuverable with 75 gallon tanks under each wing, its ability to fly six hour missions was unheard of at the time. In 1944 the Truman Senate War Investigation Committee gave the Mustang it's highest rating as " the most aerodynamically perfect pursuit plane in existence" Metal Sheet Covering attached to a lightweight frame fully detailed cockpit with a sliding cover Measures 29" long by 26" wide along the wingspan and 7" tall Provided fully assembled Retractable wheels into the plane wings

MSRP:
Now: $895.00
Was:
An Airplane Pedal Car that has been restored with a rustic appearance. Features a hand-painted marking on the plane body logo on the car body, vintage rubber tires on steel wheels, leather seat. T
airwal

MSRP:
Now: $29.95
Was:
Each sign is hand-crafted steel enamel proudly made in the USA. Each sign is 12" by 16" in size weighing approximately one pound each with corner holes for easy hanging
MSF394-13A

MSRP:
Now: $895.00
Was:
Spitfire. The legendary Spitfire fighter plane was introduced in 1936. The short-range, high-performance, single-seat aircraft gained notoriety in defense against Luftwaffe attacks during the Battle...
AP456

MSRP:
Now: $6,995.00
Was:
A full size figure of a Texaco Attendant providing Free air. A re-issue of an actual statue that was displayed in the 1950's. An original was sold at the Barrett Jackson auction for $65,000 five...
TEXAIRST

MSRP:
Now: $250.00
Was:
Wood propellers used to be replaced as often as tires. Old ones were usually taken home, completed with a clock, and hung over the mantel. Mechanics, pilots, flight-crew. They wore propeller tiepins...
AP155

MSRP:
Now: $249.00
Was:
Detailed model of the one that Charles Lindberg soloed across the Atlantic. Take a peek through windows into a detailed cockpit. Dimensions: 12.25 by 19.5 by 3.5 inches Discontinued-Limited...
AP250-DISC

MSRP:
Now: $129.95
Was:
From the American Beauties by Greg Hildebrandt licensed collection, this Nude Lube Garage plasma measures 18 inches by 28 inches and weighs in at 8 lb(s). This plasma is hand made in the USA using...
HB213

MSRP:
Now: $4,500.00
Was:
An original Mills Golden Nugget slot machine circa 1950's that has been modified to accept and pay out one dollar gold plated US coins.  The coin esculator, coin tube, slides and jack pot have...
GNDOL

MSRP:
Now: $895.00
Was:
An original Green River Syrup Dispenser in perfect original condition, circa 1930. The glass bowl sets on top of a chrome metal base with a chrome lid. The dispenser measures 14" tall by 9" in...
GREEN

Sailing with Dolphins by Kevin Daniel

MSRP:
Now: $29.95
Was:
We are so excited to be working with Kevin Daniel and bringing his nature inspired art to life through the medium of metal.  Our metal signs are all hand made in the USA on 22 gauge steel...
MSFB452-15B

MSRP:
Now: $150.00
Was:
A cocktail shaker, decoratively designed to differ from the classic shaker shape, making them less easily recognized by the police during the 1920s when the Congress voted in the Prohibition and the...
CS004