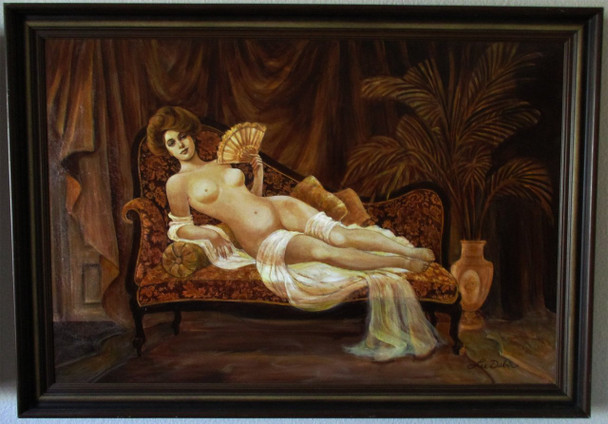 The story behind this painting is most incredible. Lee Dubin has a firm belief in reincarnation. She has memories of several of her past lives including a San Francisco Madam. When she is painting, she must be totally alone and will enter into a trance of complete concentration. While painting the subjects in the paintings will converse with Lee. In this particular example the young lady, Evelyn Nesbit, argued with Lee concerning the upholstery of the sette. The original pencil sketch and first painting in the brown sepias was gold embroidery. Evelyn demanded red crush valor. Due to the challenges voiced by the subject "Evelyn" Lee never completed the initial painting and restarted with a red crush valor sette.

The inspiration of Evelyn Nesbit is a fascinating story which can be confirmed by the following link: http://evelynnesbit.com/

The details of Evelyn with Stanford White and Harry Thaw was the scandal of the century at 1900's. Evelyn's beauty and relationship with these two leaders in the New York City community would be an incredible adventure even in the present time.

When Lee Dubin originally painted this work of art, she was not aware of the facts behind the model. It was later after the painting was completed these facts came forward. Her husband, Marv, though aware of Lee's inspirations, was actually uncomfortable with her creative awareness. It was Lee who actually provided me the name of the model as Evelyn. It was research on the internet that actual brought the facts forward. This painting has the most incredible aspiration of the talent of Lee Dubin

MSRP: $4,500.00
Now: $1,595.00
Was:
Offered is a limited edition of a painting of Evelyn Nesbit that was artist enhanced by the original artist, Lee Dubin. The framed canvas measures 45" wide by 30" tall. The actual artist board...
cvevelyn

MSRP:
Now: $20,000.00
Was:
This painting reflects the incredible detail Lee Dubin displays in her art. There are nineteen different characters, each with their own personality as displayed by the cowboy attempting to court the...
LDWEST

MSRP: $18,000.00
Now: $12,500.00
Was:
A framed original painting by Lee Dubin featuring nine characters captured in incredible detail. The most important detail is our Keeshound "Bentley" enjoying the saloon atmosphere. Many of the...
LDWSB

MSRP:
Now: $129.95
Was:
From the American Beauties by Greg Hildebrandt licensed collection, this Nude Lube Garage plasma measures 18 inches by 28 inches and weighs in at 8 lb(s). This plasma is hand made in the USA using...
HB213

MSRP: $40.00
Now: $34.95
Was:
From the Greg Hildebrandt licensed collection, this Silver Palate Champagne vintage metal sign measures 12 inches by 18 inches and weighs in at 2 lb(s). We hand make all of our vintage metal signs in...
HB111