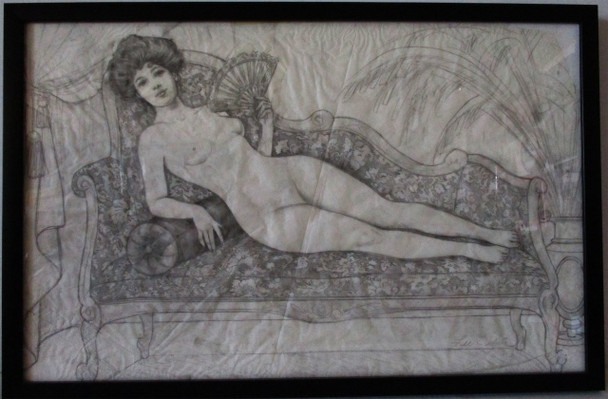 The original pencil sketch by Lee Dubin in the creation of the Evelyn painting. The framed sketch measures 31.5" wide by 20.75" tall with a 1.5" depth. Note the upholstery on the settee features gold embrodie. When actually preparing the original painting the subject, Evelyn, demanded the settee be red crush valor vice the gold embrodie. Lee never completed the initial painting having to start over with the red crush valor that Evelyn demanded. Though Evelyn is the model, this image is a creation of almost a hundred years ago. Evidence of Lee's belief in reincarnation and her ability  to communicate with her models

The story behind this painting is most incredible. Lee Dubin has a firm belief in reincarnation. She has memories of several of her past lives including a San Francisco Madam. When she is painting, she must be totally alone and will enter into a trance of complete concentration. While painting the subjects in the paintings will converse with Lee. In this particular example the young lady, Evelyn Nesbit, argued with Lee concerning the upholstery of the sette. The original pencil sketch and first painting in the brown sepias was gold embroidery. Evelyn demanded red crush valor. Due to the challenges voiced by the subject "Evelyn" Lee never completed the initial painting and restarted with a red crush valor sette.

The inspiration of Evelyn Nesbit is a fascinating story which can be confirmed by the following link: http://evelynnesbit.com/

The details of Evelyn with Stanford White and Harry Thaw was the scandal of the century at 1900's. Evelyn's beauty and relationship with these two leaders in the New York City community would be an incredible adventure even in the present time.

When Lee Dubin originally painted this work of art, she was not aware of the facts behind the model. It was later after the painting was completed these facts came forward. Her husband, Marv, though aware of Lee's inspirations, was actually uncomfortable with her creative awareness. It was Lee who actually provided me the name of the model as Evelyn. It was research on the internet that actual brought the facts forward. This painting has the most incredible aspiration of the talent of Lee Dubin

MSRP: $4,000.00
Now: $2,500.00
Was:
On occassion Lee Dubin will complete detailed pencil sketches in preparation of an oil painting. Often times these pencil sketches are lost when she cuts them up to create a collage for a potential...
dramer

MSRP: $4,500.00
Now: $3,000.00
Was:
My favorites of Lee exhibiting how Coco-Cola was originally distributed at the turn of the century. A horse drawn wagon delivering cases of 6 oz bottles to the local drugstore with the merchant and...
ldcoca

MSRP: $3,500.00
Now: $2,000.00
Was:
An original framed pencil sketch by Lee Dubin featuring two small Victorian children enjoying their visit to their favorite soda fountain. The unique feature of this sketch is Lee's ability to...
LDFOUN

MSRP: $4,000.00
Now: $2,500.00
Was:
The sketch shown is the focal point used in Lee's painting of The Carousel. A young girl with a lollipop is on the lead carousel horse which is an outside row Dentzel stander. Lee is remarkable in...
ldring

MSRP: $4,500.00
Now: $1,595.00
Was:
Offered is a limited edition of a painting of Evelyn Nesbit that was artist enhanced by the original artist, Lee Dubin. The framed canvas measures 45" wide by 30" tall. The actual artist board...
cvevelyn

MSRP:
Now: $55.00
Was:
Each sign is hand-crafted and proudly made in the USA. The sign measures 18" wide by 11" tall weighing approximately one pound each with corner holes for easy hanging. Business since 1979 Thank...
MSFB106

MSRP:
Now: $29.95
Was:
Each sign is hand-crafted steel enamel proudly made in the USA. Each sign is 12" by 16" in size weighing approximately one pound each with corner holes for easy hanging
MSFB016

MSRP: $45.00
Now: $30.00
Was:
From the American Beauties by Greg hildebrandt sign collection, this La Patrona satin measures 18 inches by 12 inches and weighs 2lb(s). This sign is hand made in the USA using heavy gauge American...
HB280-PT3

MSRP:
Now: $39.95
Was:
This Nude Lube Girl custom shape measures 11 inches by 22 inches and weighs 3lb(s). This sign is hand made in the USA using heavy gauge American steel and a process known as sublimation, where the...
HB256-PT2