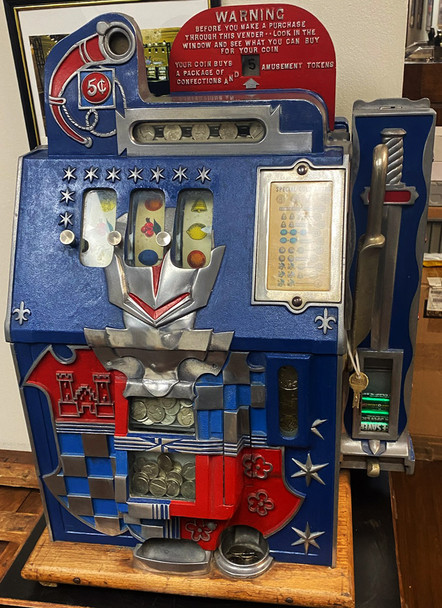 This Mills slot has every original add on feature offered by the Mills Novelty Company.

Working jackpot with a reserve

An additional added feature is the side mint vender which dispenses a roll of mints on each play. The concept was to avoid the gambling regulations by declaring the item as a candy dispenser vice a slot machine.

The future pay does not pay off on a winning combination at the time of matching symbols, will indicate the number of coins won, which would pay off on the next play. Another attempt of the slot machine operators to bypass the local gambling rules.

Only one is available

Though the primarily function of a creation of an operational slot machine, the following disclaimer must be noted:

"Due to laws regulating the sale of antique slot machines, I, as the seller, won't accept bids from members in the states of Alabama, Connecticut, Hawaii, Indiana, Nebraska, South Carolina, and Tennessee. Bids from members residing in any of these states will be cancelled. Buy It Now transactions with buyers residing in these states will be considered void"

American Collectibles has been in business since 1979

Thank you for your interest

MSRP:
Now: $2,995.00
Was:
An original nickel Jennings Victory Chief Slot Machine, circa 1940's with a working jackpot. Measures 27" tall by 15" wide by 16" deep The unique feature is the wood front vice the typical cast...
SLJENVIC

MSRP:
Now: $3,250.00
Was:
A fully restored Mills Chevron QT 5c Slot Machine circa 1936.  The QT slots were a very small production by the Mills Novelty Company and have become very challenging to obtain due to it's...
CHEV5

MSRP:
Now: $2,595.00
Was:
An oriiginal Mills Chevron QT 5c Slot Machine circa 1936.  The QT slots were a very small production by the Mills Novelty Company and have become very challenging to obtain due to it's limited...
MILLCHEVO

MSRP:
Now: $2,995.00
Was:
A fully restored Mills Chevron QT 5c Slot Machine circa 1936  The QT slots were a very small production by the Mills Novelty Company and have become very challenging to obtain due to it's...
MILLQT5

MSRP:
Now: $39.95
Was:
We design and make each of our signs in the USA.    Our signs are proudly made in the USA out of 22 gauge steel    Sublimation printing provides enhanced colors, scratch and...
MSFD094

MSRP:
Now: $49.95
Was:
Advertising metal sign printed on 22 gauge steel made in the USA Sublimation printing which is scratch and fade resistance Metal sign measures 20" wide by 7" tall Business since 1979 Thank you...
MSFB280-31A

MSRP:
Now: $59.95
Was:
Each sign is hand-crafted and proudly made in the USA. The sign measures 18" wide by 11" tall weighing approximately one pound each with corner holes for easy hanging. Sublimation printing...
MSFB106-13A

MSRP:
Now: $29.95
Was:
Each sign is hand-crafted steel enamel proudly made in the USA. Offered is a metal sign of an image of a Coca-Cola neon sign place on a brick wall. There is no actual neon provided Metal sign...
MSF650-57B

MSRP:
Now: $49.95
Was:
From the Flyland Designs sign collection, this Eagle With US Flag Wings Spread plasma metal sign measures 21 inches by 12 inches and weighs 3 lb(s). This sign is hand made in the USA using heavy...
FLY044-22A