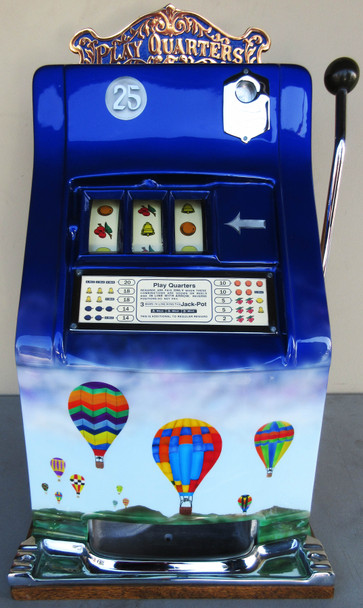 Though primarily an operational mechanical slot machine, it has been transformed into an incredible unique of art featuring the hot air balloons of early days.

The face of the slot was carefully transformed to a perfectly smooth surface to provide the surface for the incredible art work.

Over fourty hours of detailed air brush painting was required to create the effect of the  flying hot air balloons.

The same detailed is noted with the arrow indicating the winning reel strip row and the 25 cent emblem noted next to the coin entry.

The surface of the painted slot face is like glass with the smooth finish.

As with any creation of art, there is only one available not to be copied.

Though the primarily function of a creation of art or an operational slot machine, the following disclaimer must be noted:

"Due to laws regulating the sale of antique slot machines, I, as the seller, won't accept bids from members in the states of Alabama, Connecticut, Hawaii, Indiana, Nebraska, South Carolina, and Tennessee. Bids from members residing in any of these states will be cancelled. Buy It Now transactions with buyers residing in these states will be considered void"

American Collectibles has been in business since 1979

Thank you for your interest

MSRP:
Now: $3,295.00
Was:
A Mills Golden Falls Slot refinished in it's orginal color scheme. Quater operated with a working jackpot circa 1940's. An excellent value for your first slot that will provide countless hours of...
millgf

MSRP:
Now: $4,500.00
Was:
An original Mills 25c High Top slot machine, circa 1950 that has been fully restored The metal work has been chrome plated. The body has been restored in an automotive red paint finish The wood...
mills

MSRP:
Now: $4,950.00
Was:
An original Mills Bonus 5c High Top slot machine, circa 1950, that has been fully restored The metal work has been chrome plated. The body has been restored in an automotive yellow paint finish...
MILLBON

MSRP:
Now: $12,500.00
Was:
An original 50c Jennings Standard Chief Slot Machine in the original mahogany cabinet, both have been fully restored. The slot. circa 1930's, has all the metal work chrome plated. The mechanism has...
JEN50ST

Jennings One Dollar Chief Light -Up Circa 1950's

MSRP:
Now: $4,500.00
Was:
An original Mills Roman Head quarter slot machine manufactured by the Mills Novelty Company circa 1930's This slot appears as it would be featured at Ceasor's Palace in Las Vegas but was two decades...
slmills14

MSRP:
Now: $49.95
Was:
Image of a neon sign printed on 22 gauge steel ( not a real neon ) made in the USA Sublimation printing which is scratch and fade resistance Metal sign measures 15" wide by 11" tall Business since...
MSFC267