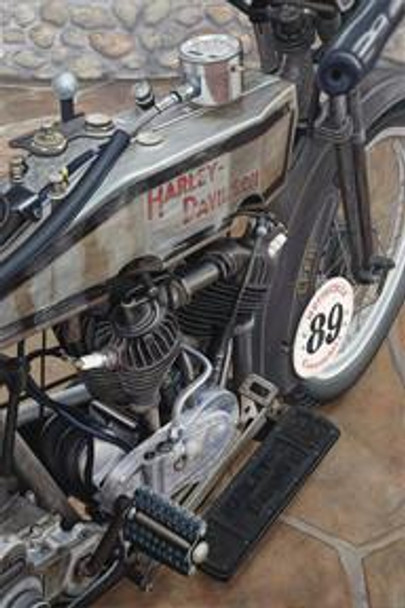 Harley-Davidson image originally painted by Scott Jacobs 2011. The image has been laminated ready to be displayed. The art measures 36" tall by 24" wide by 1.5" deep. Limited Availablity This 1915 Harley-Davidson was ridden by Cris Sommer-Simmons, the only American woman who participated in the 2010 Cannonball Run. Cris finished in an impressive 20th place. Pat purchased the bike in the 60′s and restored it himself. In 2010, Pat hoped to ride the bike himself, but due to his schedule, wasn’t able to do so. After discussing this with Cris, they both decided that she would ride it. The number 89 was chosen by Cris because it was the year she met Pat. The art work is dry mounted on a high quality 1/8" tempered masonite board. The bond is everlasting and will never lift or peel. The art work is covered with a non-glare UVL laminate film. Through high heat and pressure the laminate and art is permantently bonded. A 1.5 inch box frame is mounted arounf the art work. The borders are beveled, sanded, and receive a paint finish. The final result is a high quality laminated art that will greatly enhance your home decor.

MSRP:
Now: $395.00
Was:
An original Kellogg chrome plated candlestick telephone  circa 1905, that has been fully restored and is operational. The telephone  measures 12" tall by 5" in diameter base. The phone...
CAN229

MSRP:
Now: $250.00
Was:
The image of the 1936 Duesenberg SJN Rollston Convertible Coupe was the featured classic at the 2013 Dana Point Concours d'Elegance at the St. Regis. An incredible classic valued for over seven...
LA126